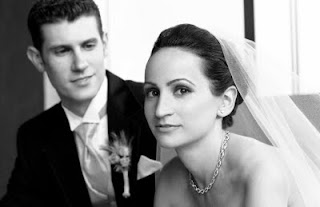 Above: Rachel Eddey and her husband, John

I'd like to welcome you to this first author spotlight, featuring Rachel Eddey, authoress of the upcoming memoir RUNNING OF THE BRIDE. I met Rachel on Authonomy.com earlier this year, where she'd posted her opening chapters. I was immediately drawn to her chatty and personal style, the way she makes the reader feel as if she's their best friend. Witty prose? She's got it? Pages that move lightning fast. Yep. RUNNING OF THE BRIDE has all the makings for a very fun read! Don't believe me? Here's the synopsis:


When Rachel’s handsome studio exec boyfriend proposes to her on the Sex and the City movie set, she can’t fathom the dizzying adventure about to begin. Accepting a once-in-a-lifetime venue deal helps their budget, but it puts them on a crash course to get married in just four months—and time isn’t their only challenge. They battle a wacky assortment of vendors, including a hair stylist who fakes a car accident and a makeup artist overly inspired by Marilyn Manson, all while testing their love and discovering much-needed truths about each other amid tastings and tulle. Determined to use her nervous energy productively, Rachel enters every contest she can find, winning diamond earrings, a honeymoon, a photographer, and two wedding gowns. Her obsession with pop culture lands the entire wedding party on not one but two hit reality television shows. As the clock ticks down, there’s just one problem: her staunch perfectionism and fear of dancing threaten to derail everything. She has to learn to redefine perfection and embrace the mistakes—or risk losing it all. In Running of the Bride, Rachel fearlessly shares the hard-earned lessons she learns along the way and reveals her secrets to winning contests and attracting television producers. But for now, please take your seats. The wedding is about to begin.

Yeah, you could say I was hooked.

Anyway, a lot has happened in the past year and I'm pleased to announce RUNNING OF THE BRIDE has been picked up by Globe Pequot Press (hell to the yeah, yeah, yeahs!), to be released in May 2012. This is really exciting news, especially when you consider Rachel's journey from pitch to publication has been far from easy...

1) Rachel, tell us about your journey. Did you send out queries to agents? Or did you submit to publishers directly? How long did it take you to get from pitch to publication?

I feel like I have the journey to beat all journeys. (Note: I welcome friendly competition. Just don’t gloat too much if you win because I cry easily.) So it goes like this: Since 2008, I’ve cycled through three agents. Three as in...three. One from a small agency, one from a large agency, and one from a medium agency. I so went Goldilocks on this piece. After two and a half years with lots of interest from big houses but no offers, I decided to represent myself. I contacted my now-editor on May 4, 2011 and had an offer on May 19. Two and a half years with agents and I sold the book myself in 15 days. There’s just no way to tell how this wild world of publishing is going to work out.

2) You had a very successful Facebook campaign to develop your "platform," something the publishing industry say memoir writers need. Do you think all your hard work influenced the editor who signed on Running of the Bride? Would you do it again?

Being a “nobody” has its advantages, like if you want to rob a bank or streak during a football game. But when it comes to publishing a memoir, it’s very hard to get people to care about your life when you aren’t famous, infamous, or both. (I’m looking at you, Heidi Montag.) I started a Facebook campaign called Put Running of the Bride by Rachel Eddey on Bookstore Shelves as a way to show publishers that there were a few people who cared about the book—or at least who cared enough to fake it. I do think this helped me in the end because sales are so dependent on an author’s willingness to get out there and sell, sell, sell. The Facebook page was a good jumping-off point to say, “Hey! I’m in it to win it!”

3) What's your editing/writing process like? Does it involve a big glass of wine and chocolate?

My everyday living process involves a big glass of wine and chocolate! Really, I can write anywhere, any time. Case in point: In high school, I was out to lunch and forgot I had an English paper due the next period. I quickly wrote the essay on a napkin and handed it in. My grade? A pretty rockin’ 94—I blame the six-point deduction on a ketchup stain in the corner. I’m the same way today. I’ll write scenes on the back of water bills or receipts or junk mail whenever I find time. And I still get ketchup everywhere.

4. Did you learn anything from writing your book and what was it? Do you have any plans for another book? Are you ready to spill?

As scary as this sounds, writing a book is the easiest part of writing a book. After writing, you have to sell the manuscript, go through revisions, and work with the publisher on layout / design / cover before you get to the beast of it all: the devil that is promotion. The whole process consumes your life, which can be off-the-wall exciting if that’s what gets you going or out-of-body terrifying if it’s not. The silver lining, of course, is that if you have success with your first book, you don’t have to worry about promotion as much the second time around. But it’s true. You really have to sell yourself. Not in a Pretty Woman kind of way, but close. I do have plans for another book, a second memoir. Stay tuned!

And now for some fun:
5) If there was a soundtrack for your memoir what songs would play?

I’d love to see a throwback to all the emo-punk bands I used to listen to—I told you I cry a lot—like Taking Back Sunday, New Found Glory, Starting Line, Saves the Day, and Brand New. They’re all so emotional and sappy. Perfect for a wedding book!

6) Who would play you in the Running of the Bride: The Movie? (I'm personally voting for Natalie Portman, but not Black Swan Natalie; she's, well, kind of scary.) What about your husband, or any other of the main characters?

I can definitely stand behind Natalie. I’ve also had eyes for Zooey Deschanel, Kat Dennings, and Emma Roberts. Oh, and I have to throw in Jennifer Love Hewitt even though she’s … how to put this delicately…a hair on the getting-too-old-for-this-kind-of-stuff side because my husband, John, has been an uber fan for years. I’m gunning for a funny-man like Seth Rogan or Jason Segal to play John. Really, I just want to become besties with the whole Judd Apatow gang. They seem delightful.

7) If you were a Sex in the City character which one would you be? Why?

I have to go with Carrie on this one for two big reasons: a) she’s a writer and b) she burns through money like the world’s ending. I’m, you know, maybe guilty of that as well.

Of course, before this seven question interview comes to a conclusion, it's time for some random, where a few French things are thrown into the mix:
* Rachel's answers are in red.
1) Filene's Basement or Loehmann's
2) Bhlanik or Louboutin
3) Cosmopolitan or Dirty Martini
4) Bagel or Croissant
5) People Magazine or US Weekly
6) Lindsay Lohan or Britney Spears
7) Camille LaCourt or Yoann Gourcuff (definitely had to look them up!)

Thank you so much for your time, Rachel!

To learn more about Rachel and RUNNING OF THE BRIDE, check out her Facebook page, her blog on The Jerusalem Post, or visit her website. She can also be reached via email.

In sum, I'm thrilled for Rachel's success and, I, for one, can't wait to catch Running of the Bride when it comes out in both paperback and e-book formats next year. Until then, I'm waiting patiently – gym shoes on, glass of congratulatory champagne in hand.