When my family came to France at the end of August, The Frog* and I not only showed them some sites, we also introduced them to some family members not yet met. Take Richard (pronounced ree-shar, soft on the "d"), The Frog's sister's partner, by example, whose induction to the French side of the family always includes a little hazing.

*(I recently got an email asking if I was really married to an actual frog. To answer that question: Uh, no.)

Mind you, Richard understands English, but doesn't speak it, at least willingly. So it's probably a good thing I was able to help translate the following conversation for my sister:


Richard: I have the perfect guy for you, Jessica.

He pauses, dramatically, until the whole dinner table – four Americans and fourteen French – has his attention.

He's very handsome. A doctor, like me, he's in a good position. He's in excellent shape. He's funny, charming and he has a lot of friends...

A sinister (and I mean sinister) smile stretches across Richard's face.

But there's just one little problem...

He's completely covered in hair and needs to be shaved every
two or three days.


Richard waits for the laughter to die down, and continues.

Richard went through a few more potential prospects, changing Jessica's ideal mate right after "But there's only one problem."

You can only imagine the ensuing choices.

Sorry, Jessica. Better you than me. And at least you survived Richard's Elvis impersonation... 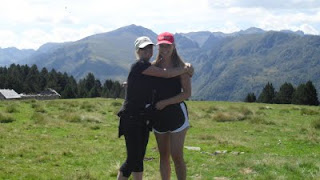 Yes, it was nice having my family around.

Have a great weekend everybody!

Gotta go! It's time to renovate the lily pad!

à plus tard and gros bisous!

p.s. you gots to love them parentheticals....