Hang on to your wooden spoons. Here comes another installment of A Self-proclaimed Princess Cooks in France!

The other day la fille complained voiced her opinion that we don't eat enough dishes with vegetables. Which is weird because I always make sure fresh legumes accompany every meal. Anyway, I'm fairly certain there's a law prohibiting self-proclaimed princesses from diving over the table and stuffing tomatoes from her garden down unsuspecting throats, so I'm thankful the Frog jumped into the conversation, stating, "Fine. How about this for variety? No more french fries."

Le fils eyes bugged out. He raised his hands and shot his sister a look. "I'm not complaining. You can make vegetables for her."

Translation: if you don't make french fries for me, she's dead.

My policy is: if you want something, just ask. I'll make it. You're sick of tasty summer salads with fresh tomatoes from the garden. Sick of homemade quiches prepared with leeks or courgettes (zucchini)? Fine. I'm not a mind reader. Help a self-proclaimed princess out, already. Give me some ideas. Get some recipes from your grandmother. La fille's response to this was: but you can find recipes online.

Much to le fils chagrin, I did.

La fille, upon my demand request, acted as sous-chef. 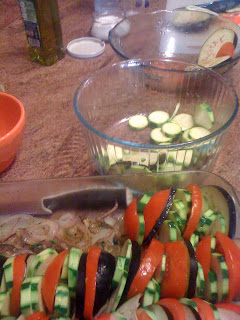 
Pre-heat your oven to 375. Lightly grease a baking dish with olive oil.

While your reluctant sous-chef is slicing up the legumes, add some olive oil to a large pan. Add the onions to the pan along with the minced garlic and a pinch of salt. Cook until onions are soft. Line the bottom of your baking dish with said mixture.

After your sous-chef sneaks off into her bedroom to watch a movie, toss the vegetables she cut up in olive oil, a dash of salt and pepper, and a couple of tablespoons of herbs de provence. Alternate the vegetables in tight rows on top of the onion mixture. 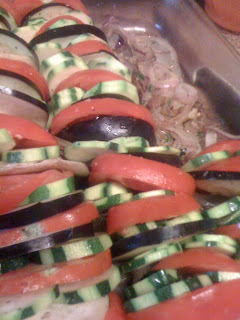 Cover the dish with aluminum foil and bake for thirty minutes. Then, uncover and sprinkle the entire dish with the parmesan cheese. Bake for another twenty minutes until the cheese is nice and crusty.

Le fils wanted to know where his french fries were.