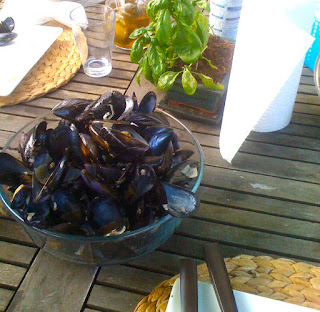 But I don't want to share my kitchen disasters with you, the times when the kids screamed and shouted This is DISGUSTING! (C'est déguelasse!) and my less than pleased responses to said drama. Non, non, non! I want to share the victories, which, thankfully, I've had more of. So welcome to my first installment of A Self-Proclaimed American Princess Cooks in France.

Note to self: Never make tuna noodle casserole ever again. And kids? They don't like red pepper flakes.

No matter.
Today I'm sharing my recipe for Moules Marinière, which gets a FIVE FROG rating for taste, ease, and French family satisfaction. mmm-wha! ***does that weird five fingers to the lips kiss thang***

Come to think of it, I should change my rating system: 3 frogs, one American princess – coming at you next time.

Back to Moules Marinière...


These are the empties. SUCCESS.

*If cooking individual servings, it takes around 5-7 minutes. You just shake your covered pot on the burner. Et voilà!

What you'll need for a family of FOUR:

Mussels – about 1 pound per person– so four pounds for four people. Got it?
Tip: Buy the ones that have already been cleaned, or de-bearded

White Wine- 1 cup per serving above

Fresh Ginger- this is my own add in. I use a two inch piece, diced. Yum to the power of YUMNESS!


How to prepare:
Rinse mussels. In a large pot, heat butter and olive oil together. Add garlic, shallots, and ginger. Cook until shallots are tender. Add herbs and salt. Stir. Add cilantro. Add mussels. Add wine. Stir. Bring to a boil, then lower heat to medium. Cover. Stir mussels, moving those from the bottom to the top every five minutes until you notice all of the mussels are open*.

*NEVER eat the mussels that remain closed. Through those away! They're no good!

How to serve:Garnish with cilantro.

Note: Want to add a spicy kick? Slice up some red jalapenos nice and thin, about four slices per serving.

A good wine? Try a Cabernet D'Anjou– a wonderful rosé from the Loire Valley.