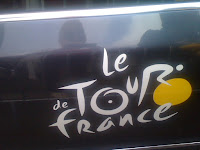 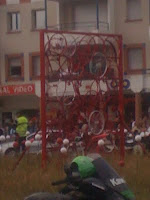 My town put these bicycle sculptures along the route. 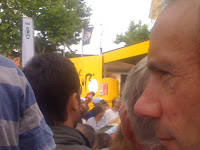 Hey, Dude, get your big fat head out of my shot. 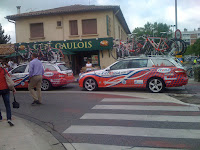 The Russian Cyclist team. Cheating??? Okay, okay,
I know they are spares, but WHERE are the cyclists? 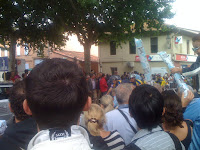 Aha! Cyclists! Maybe. Uh, I don't know.
It could be the mayor and his friends?

The Tour de France passed through our town yesterday. And it was weird. Basically, there was a parade of around 100 wrapped cars of advertisers playing dance music. Nesquick, Vittel Water, Bic, the list goes on. Then, I think, some cyclists passed, but I'm not so sure they were the athletes. An old man with a huge gut hanging over his tight bike shorts ? Yeah, I'm not so sure. After the random parade, I waited around for about 1/2 hour, confused. And then I went home.

I thought about wearing an American flag t-shirt and chanting USA, but I didn't want to end up in the emergency room again. Seriously, I am the only American in my town – just like a sideshow attraction. My motto in crowds is to blend in. Like a chameleon. A chameleon with blond highlights.

SOUND OFF: Where did the cyclists go? Where are they now? Did they make it to the Pyrénées? And don't they know I just had a bicycle accident/loup garou attack? Are they just rubbing it in? To torture me?
Coming up soon: pink toilet paper; I hate it.