Paris Ever After-- Book Launch! 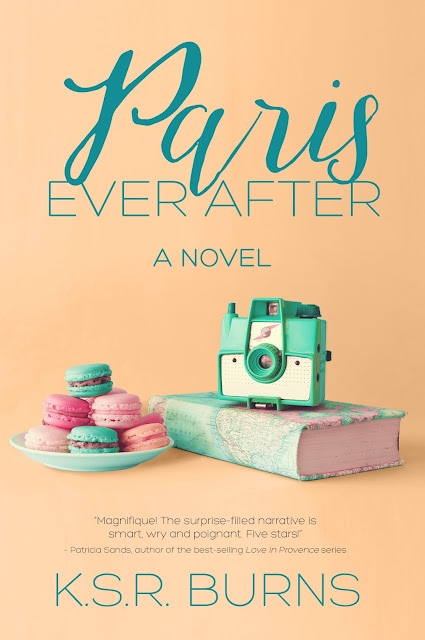 Today we're celebrating the launch of K.S.R. Burns' Parisian adventure Paris Ever After. I became a fan of Burns after I read her first book– The Paris Effect. So. Much. Fun. Here's what I had to say about her latest.


"A roller coaster of a ride, Burns’s Paris Ever After takes us on a fast-paced adventure, the plot plunging through the streets of Paris and right into the hearts of its beautifully flawed characters.  Readers—buckle your seat belts, hang on to your hats, and get ready for unexpected twists and turns. Full of wit and humor, this novel is unputdownable!"

Sidenote: don't you just want to the lick that beautiful cover???

Can Amy’s rocky start in Paris turn into a happy ever after? From best-selling author K.S.R. Burns comes another highly praised novel. "Magnifique! The surprise-filled narrative is smart, wry and poignant. Five stars!" (Patricia Sands, author of the best-selling Love in Provence series)

Amy didn’t realize how stale her life was until she jetted off to Paris without telling a soul—not even her husband—and had the adventure of a lifetime. Now as she tries to establish herself in the City of Light, she finds that despite a fun (and quirky) group of friends and the ability to indulge in French pastries whenever she wants, reinventing her life is much harder than she imagined.

Then on Amy’s thirtieth birthday, two unexpected visitors leave her wondering if she will soon be saying au revoir to Paris and the new life she’s struggled to build. Her estranged husband, Will, shows up—but is he interested in reconciliation or separation? And a young woman who arrives on Amy’s doorstep unleashes chaos that could push Amy out into the street.

As Amy’s Parisian dream starts to fall apart, she must decide: return to the stability of Will and Phoenix (if that’s even still an option) or forge her way forward in Paris? Amid secrets and surprises, set in enchanting gardens, cozy cafés, and glittering Parisian streets, Amy must choose between two very different worlds. And each has a claim on her heart.

You can purchase Paris Ever After here:


AUTHOR BIO:
K. S. R. Burns is the author of Amazon best-seller THE PARIS EFFECT (optioned for film and TV by Papazian-Hirsch Entertainment), its standalone sequel PARIS EVER AFTER, and THE AMAZING ADVENTURES OF WORKING GIRL: Real-life Career Advice You Can Actually Use. Burns has lived and worked in four countries and 22 cities, including Paris. No longer a wanderer, Burns now resides in the Pacific Northwest, where in addition to novels she writes a weekly career advice column for The Seattle Times. She can also be found online at KSRBurns.com.