It's Time to Stop the Bullies

"The problem is real."

"The problem is being ignored."

And despite the 241,000+ signed petitions seventeen-year-old Katy Butler hand delivered to their offices yesterday, the MPAA isn't budging, still sticking by their nonsensical decision to give BULLY, a documentary on said subject, its much needed PG-13 rating because of six or so "f-bombs."

Well, I for one, would like to tell the MPAA to visit some local middle or high schools and listen in on some conversations, to learn first-hand how kids really talk to one another when their parents or teachers aren't around. Maybe, after another child is bullied to death, they could attend his or her funeral, explaining their reasoning to the family.

Who is the MPAA trying to protect with an "R" rating? I'm thinking – themselves. I don't think it should be up to them to make this decision. It's up to the kids and to parents and schools if they want to see/show the movie or not. Unfortunately, if BULLY isn't given a PG-13 rating, schools–  where it can make the biggest impact – won't be able to show it. Here's what teachers are saying about BULLY:

I'm a middle school teacher and know my students are far more ready for this kind of movie than adults give them credit for. If they are blocking it because of language, they are living in the dark ages, and that is a dangerous place to be.


I taught middle and high school for many years. We are protecting our children from the wrong things. Bullying will do FAR more harm than watching a movie to help prevent it.


For BULLY to get its PG-13 rating, the MPAA wants to delete or bleep out the few used expletives, thus dumbing down the movie's message. I can't say firsthand, as I haven't seen the film (it's yet to be released), but I've heard the swearing is far from gratuitous. What is the MPAA's point? Do they think a GLEE version of the movie will keep it real? How about one of those lame after school specials? You know, because we all took those so seriously.

Over the years, bullying has reached new levels of cruelty and the stories are endless. Taunted by classmates after she accused an older student of rape, fourteen-year old Samantha Kelly committed suicide. Nine teens cyber-bullied fifteen-year-old Phoebe Prince until she hung herself. Would they censor the text messages and facebook messages she received? What about fourteen-year-old James Rodemeyer who was relentlessly teased by kids because he was gay? On September 9, James wrote the following on his Tumblr site: 'I always say how bullied I am, but no one listens. What do I have to do so people will listen to me?'

Well, he killed himself.

I've been a member of change.org for about three years now. I don't sign every petition that comes into my in-box, only causes I believe in. So on February 28th, when I was alerted to Katy Butler's story, it took me one second to make my decision. See, I was bullied in middle school, the abuse not physical, but emotional. So much, in fact, I begged my parent's to send me to the private Catholic high school a couple of towns over. Here's the thing: I'm not Catholic.

Ultimately, the change in schools was a good one for me, but not every kid has a choice or can run away from their problems. Alas, this movie can bring awareness to a growing and dangerous epidemic, shedding light on a REAL issue in a very REAL way. Not only could the film play a role in saving a child's self-esteem, BULLY may be able to save lives. 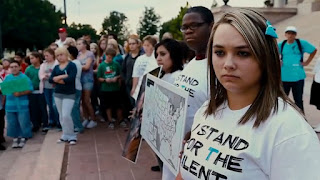 Katy Butler's petition to give BULLY its much needed PG-13 rating is still going on – alive and strong. It took over 240k signatures to get the MPAA to listen to Katy's plea. Maybe with more, we'll be able to get the MPAA to overrule its decision.  So raise your voice and stand up for the silent. If we don't, who will? Sign the petition! Click; STOP BULLY FROM BEING BULLIED TODAY!

On that, I'll leave you with the trailer of BULLY.

p.s. Hey, Katy Butler. I may not be a celeb like Ellen, but I'm damn proud of you, too. I said it before. I'll say it again. YOU ROCK! To Lee Hirsch and The Weinstein Company, thank you for making this film.

Gros bisous to all of you! Raise your voice!