Melting Pot Monday, where random is a way of life!

Skiing in the Pyrénées with a Yeti. Ah, life in France. It's great....and a bit harried!


First off, I have to apologize for not making my blog rounds last week. That will change this week! I've been busy...


1) Last weekend, we took the kids skiing in the Pyrénées, about a two hour drive from Toulouse. The Frog's brother, "Mr. Yeti," made a surprise appearance on the slopes.


2)  I didn't ski with the frog or the tadpoles, opting for lessons instead. This, my friends, was a very good idea, considering the first time I went skiing with Jean-Luc I rolled down the mountain, smashed my head, and twisted my knee. Although my instructor didn't speak ONE word of English, I was able to get by with my French. And I didn't fall down once. For this, I am proud. Huzzah! 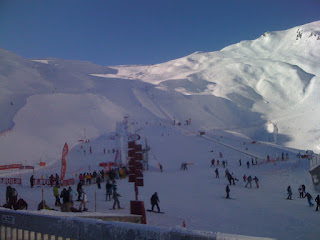 3)  I brushed the snow off a trunked manuscript and entered it into a writing contest. Anyway, I get a bit obsessed, so last week was spent breathing some new life into the words. Word CPR. Hey, I just may coin that. Nothing like bringing a manuscript (and character) you love back from the dead. We'll see. It could be a crap shoot, but, I figure, there's no harm in trying.

4) In the next few weeks, I'll be finishing up revisions to my memoir, as well as finalizing the proposal. As it stands, the proposal is around 70 pages, and the manuscript, itself, will be about 80-85k, down from 96k. Yep, I'm making some major cuts, shaking things up, and shuffling things around. And, nope, in this draft, I'm not holding back.

5) When I'm not working on the above, to give myself a little break from my "life," I'll also be working on my YA, FLYING BACKWARDS.

Well, that's it on my end. What have you guys been up to? Any news? Any fun? Have you ever met a real live yeti?