Wednesday is All Write: The Bernard Pivot Blogfest 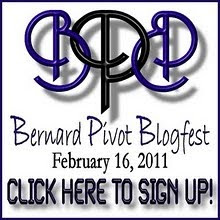 Nicole, over at One Significant Moment at a Time, is hosting the Bernard Pivot Blogfest today, which I am participating in. If you're familiar with Inside the Actor's Studio, you would know James Lipton, the host, asks his guests a series of questions at the end of each show.

And what does that have to do with Bernard Pivot?

Well, he's the French journalist who can be originally credited for this format.

Which, in turn, inspired this blogfest, where Nicole supplies the questions and I answer. So, yeah, it's kind of like being a movie star for a day but without the fame or fortune. Oh well, at least I don't have to deal with the damned paparazzi...

What is your favorite word?

floccinaucinihilipilification (try saying that three times fast. Heck, try saying it once!)
Noun – the estimation of something as valueless (encountered mainly as an example of one of the longest words in the English language). origin: 1735–45; < Latin floccī + naucī + nihilī + pilī all meaning “of little or no value, trifling” + fication

What is your least favorite word?

Guilt. It's such a nasty and manipulative weapon. I'm over it.

What turns you on creatively, spiritually or emotionally?

Just call me nature girl! Throw me on a trail and let me explore. I'm inspired creatively, spiritually and emotionally when I'm surrounded by the beauty of the world.

What turns you off?

What is your favorite curse word?

What sound or noise do you love?

What sound or noise do you hate?

Lately, it's been video games and manga inspired music. Played together. Blame the eleven year old. Yeah, when a certain song plays for the sixth time in a row it kind of makes me want to snap.

What profession other than your own would you like to attempt?

Wildlife rehabilitator in an exotic local – either working with tigers and gibbon monkeys in Thailand or Cheetahs/Leopards in Africa.

I wouldn't want to work in the sewer. What's that movie with the mutated rats?

If Heaven exists, what would you like to hear God say when you arrive at the Pearly Gates?

Be sure to check out the other entries! Clicky, clicky!

Personal note: Yesterday I was supposed to post some outrageously fantastic news – something, in fact, that had absolutely nothing to do with writing. I was ready to shout my news from the mountaintops, especially after holding it in for so long, but things changed. For the worse. I am, for lack of better words, devastated. But time heals all wounds and what doesn't kill us makes us stronger, right?