Bring Back the Tail!! Update.

UPDATE: Moved back up to 22. 15 people have backed the book. Let's get this back to a first page view! Five more backings and I donate another book to a charity!

Correction: 16 people have backed Mutants! Thanks, Masked! Oddly, this didn't move my ranking up. Weird.

Update: Backed by 17 people. (Thanks, Sara) Ranking has not moved up. Or down. I think, perhaps, the longer I sit on somebody's library, the more points will be accrued. Or so it would appear.

My ratings have been going up and down. From number 21 to number five, as seen here. 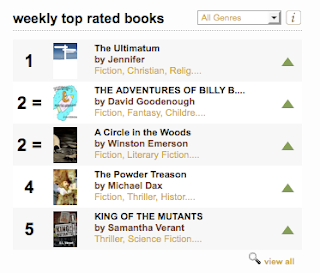 And then dropping down to 51, which I don't understand.

I've gotten some funny comments, one from an eight-year-old boy who didn't think Peaches Supreme, the fat lady, should smoke. He did, however, back the book, saying he liked the part about the bear. I, of course, explained that I am in no way glamorizing smoking, just keeping it real at the world's cruddiest circus. Here's the scene in case you are interested:


I made my way into her tent, purposely not going in too far. And there she was in all her peachy glory, all six hundred plus pounds of her. Her jowls, made even more pronounced from sweat, jiggled like a running bloodhound’s – but she wasn’t even moving.

Peaches sneered at me.

“Whatcha got for me, lizard?” A cigarette dangled off her lip, the ash on it about three inches long. She made strange gurgling noises as if her own chunky throat flesh strangled her. “Better be something first-rate or I’ll send Burt after ya. I need my beauty sleep, you know.”

I snorted back a giggle and dangled the box of tasty treats in front of her. A large drop of drool glistened on her lips, and then dripped off one of her extra-long chin hairs.

Yeah, no glamor there. None at all.

At any rate, if you can...check it out, back Mutants if the mood strikes you, and join in on the fun.

Thanks to those who have taken the time to do so already.