Barcelona: They warned me, but I just didn't listen 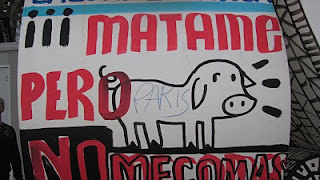 I loved Barcelona, but...

Before I left for my little excursion to Barcelona a few people warned me: "Beware! The pickpockets in Spain are really bad."

But ha. The bastards got nothing.

The Frog and I were grabbing a Starbuck's (I know, I know) after a morning bus tour. We ordered a latté and an iced Americano, paid, and then the Frog set his jacket over a chair a few feet away and made his way to the upstairs bathroom. While I waited for our drinks to come up, I walked over to the table, put my coat over his and went back to the counter.

And then it happened. Two seconds was all it took.

A man leaned over our table to talk to a couple seated by the door. Another man lifted up the shoulder to Jean-Luc's coat. Dread filled my heart. Drinks in hand, I walked over and said to the coat molester,"Excuse me. Don't touch our stuff. We're sitting there."

My stomach dropped. Oh no. "You didn't have it with you?"

SIDEBAR: Confident with their sexuality, it's true that men in Europe carry man bags – including my Frog.

"I left it under my coat, hooked onto to the seat."

Which explained the coat lifter and THE OTHER MAN! They worked in teams! And I'd been watching the table like a hawk! They were after the BAG!!! And they looked NORMAL! Just two regular older guys! Crafty bastards!

We went through his jacket pockets, not once, but twice for good measure.

Everything of importance was accounted for.

THANK GOD! Can you imagine? Being stranded in Barcelona without your car keys? With the kids coming home the next day? And no money? Normally all of these items would have been in the bag. BUT we'd been collecting crappy tourist brochures and ticket stubs. It was also supposed to rain that afternoon. So the thieves made off with a cheap umbrella, a ripped man bag (the Frog needed a new one), a bunch of useless papers, and a BIC pen.

SO HA! Take that, thieves. You risked being busted on a bunch of nothing. And had the Frog caught you, well, I just won't get into that.

I did have a daydream about elbowing the coat molester in the face, which I told the Frog about. He told me I watched too many "American" movies.

Moral of the story: Even if you are two feet away from your table, never leave your things unattended! EVER. Also, when your Frog (everyone should get one) goes to the bathroom make sure he takes his man bag with him.

Any of you been the victim of a theft?

More uplifting stories later this week. Barcelona was a blast!