First, a confession: I've known Pam Ferderbar for well over ten years now. And I've been anxiously waiting for FENG SHUI & CHARLOTTE NIGHTINGALE to hit the shelves ever since I read an early draft of the manuscript many moons ago. A few months ago, Pam sent me an advance reader copy, reminding me why I fell in love with the story and Charlotte many moons ago. THIS BOOK IS HILARIOUS, OFF-THE-WALL, and FABULOUS. It's no surprise New Line Cinema bought the film rights...before the book ever came to market. (We're all still crossing our fingers they give it the green light...)

Anyhoo, FENG SHUI & CHARLOTTE NIGHTINGALE releases today, people! Today! I'm taking this opportunity to tell you all about it.

Note: This book is not recommended for people who don't like to laugh.

WHAT I HAD TO SAY ABOUT CHARLOTTE

"Feng Shui and Charlotte Nightingale is a fast-paced, hilarious rom-com of a romp that's not only laugh-out-loud funny, it touches the heart. I couldn’t help but to root for Charlotte as her luck changes and, once a hot neurotic mess, Charlotte metamorphoses into a woman she is proud to be – thanks in part to a handsome Chinese food deliveryman and some on-the-sly Feng Shui. In her debut novel, Ferderbar has created a lovable and relatable heroine in Charlotte. Add in the cast of wacky characters and smart-as-a-whip wit and Ferderbar’s comedic genius shines. Get ready for a wild ride. Get ready for Charlotte Nightingale." 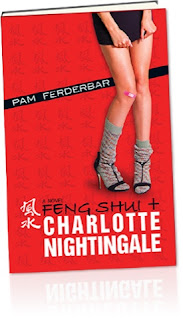 Feng Shui and Charlotte Nightingale is an uplifting and hilarious fable about empowerment and perception, and the magical things that happen when we begin to see the glass as half full.

Charlotte Nightingale has the worst luck in the world. Her cluttered apartment is the poster child for shar chi—poison luck in the realm of Feng Shui. Her boyfriend’s a jerk, her job sucks, she’s broke and her own family seems to hate her. Every day is a bad hair day. Kwan, a handsome Chinese food deliveryman and aspiring Feng Shui practitioner, takes pity on Charlotte. While Charlotte searches for the money to pay for the Emperor’s cashew chicken Kwan has delivered, he surreptitiously begins to move things around in Charlotte’s apartment in accordance with the ancient art of placement—hoping to improve her life. Charlotte’s luck subsequently appears to change in a big way. It goes from bad to worse—or so it seems.

Charlotte finds a photo of her boyfriend with another woman, her car dies, she is fired from her job, the plumbing in her apartment explodes, and making matters worse, Charlotte’s perfect perky designer-obsessed blonde sister is about to marry a square-jawed, richer-than-god, insanely handsome plastic surgeon from Beverly Hills and the entire family loves nothing more than to rub Charlotte’s nose in it.

Is it bad luck that sends Charlotte careening through calamity after calamity, or is it merely a matter of perspective? Without a loser boyfriend, beater car and crappy job, Charlotte is free to embark on a great adventure that will awaken in her a world of possibility where nothing is as simple as it seems. Until, in the end, Charlotte realizes that everything she ever wanted was right under her nose the whole time.

BUY THE BOOK (you know you want to...)
Amazon 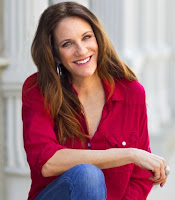 
Comments are closed on this post! Go connect with Pam!