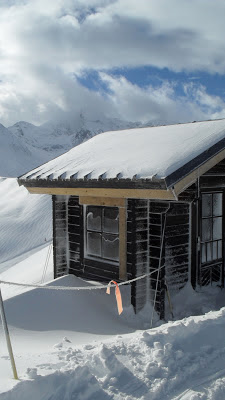 I hope all of you had a wonderful holiday season and fabulous new year's celebrations! It's been a pretty busy time for us. My parents and sister flew to France for their first Provençal Christmas and ten days of eating and sightseeing and then eating some more flew by way too quick! There were twenty-two people at the Christmas Eve dinner, and my mom was relieved we would be enjoying chapon (um, there's no easy way to say this...so castrated roosters) and monk fish in a cognac sauce—rather than the wild boar in the gray blood sauce I'd narrowly evaded the first Noël at my sister-in-law's. Admittedly, I've tried le civet de sanglier a second time. And I liked it. I guess my tastes are changing. New Year's was spent at my friend Monique's apartment in downtown Toulouse and a good time was had by all until 2:00 in the morning, an early end to the evening in France, but necessary because my parent's had an 8:00 am flight. I miss my family, but they'll get their fill of me this summer. But more on that later. Today I wanted to share last weekend's adventure with you...skiing in the Pyrenées Mountains.

We're lucky to live so close to such stellar slopes. So early on Saturday morning we drove a little over an hour and a half to the station du ski called Peyragudes, arriving at around 9:30 am, all loaded up with our rental equipment and ready to hit the slopes by 10. 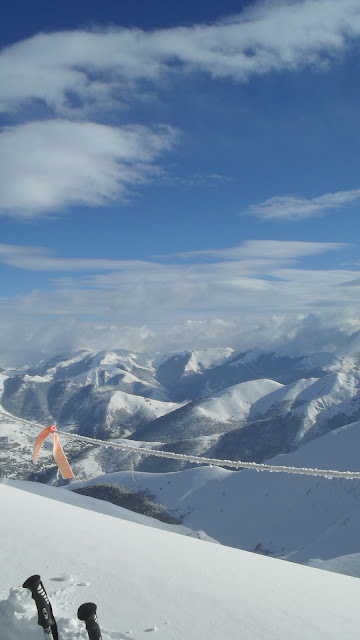 Okay, I wasn't quite ready. There was just one little problem. I may be smiling, but I'm not the best skier on the planet. I'm petrified to go fast, to fall down, to twist my knee, to hit my head....or, even worse, fly off the side of the mountain. Don't get me started on avalanches. Crazy thoughts ran through my head. Like what if I get stuck in between two rocks and nobody can find me and I have to gnaw my arm off to escape... 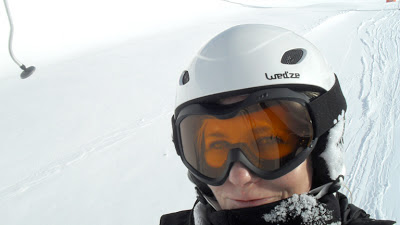 Needless to say, these kind of situations don't occur on the bunny hill. So I started out slow, zipping up the run on a tire-fesse. (literally- pull butt) The frog and the tadpoles skied with me for 45 minutes, and then left me in the capable of hands of mon moniteur du ski, Olivier, for two hours. After forty-five minutes, Olivier told me I was no longer allowed to "snow plow." Nope. No longer would three and five-year-olds pass by me laughing. I was ready. And the following day, he said, I'd face my first blue run.

The frog and the tadpoles came back at 1pm, and we enjoyed a nice lunch together, complete with a vin chaud (warm mulled wine) for me. That afternoon, le fil, who wasn't feeling 100%, and I practiced what I'd learned on the bunny hill. My confidence was up! I didn't fall down once! I went to sleep that night, barely able to move, but content. 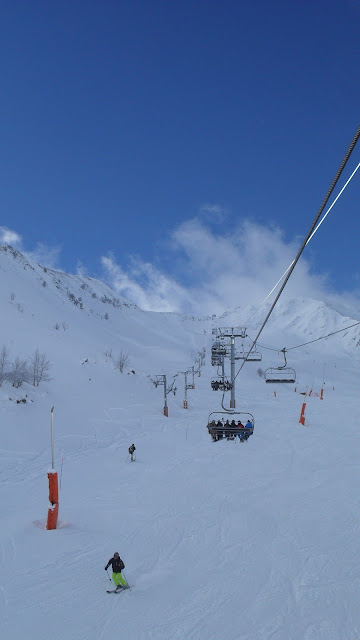 Day two, however, had me shaking in my ski boots. Olivier and I took the télésiège up to the summit, where I would face my very first blue run — about a mile and half long. And here's the thing: I DID IT! And I didn't die! And I only fell down once. Oddly, this happened right after I said the words out loud. It was like "Hey, I didn't fall down." Poof. Me in a puff of powdery snow. While I was still afraid of speed, and totally took my time, I was thrilled! I'd faced a fear and I had improved. That afternoon I was supposed to practice what I'd learned...on the bunny hill.

But the frog had other plans. We were going to do the blue run again...as a family. I agreed. And then fear set in again. They were going too fast. I felt bad slowing them down. My legs were shot from the morning's two hour lesson. The steep slopes, the speed, everything had me flipping out. I was overtired and stressed. And I fell down four times— which both embarrassed me and pissed me off! 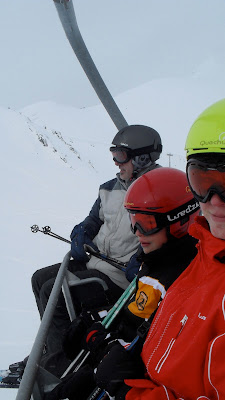 But here's the thing. I DID IT! It may have taken me an hour, but I made it down that beast of a mountain — tired and alive and, more importantly, all limbs intact.

I can't wait to go skiing again! Anybody in?