Wednesday is All Write: Speak Out Against...Book Tour

Today I am participanting in the Speak Out Against…Tour, brought to you by Moxie Writers Susan Oloier and Rebecca Green Gasper. With the recent release of both Outcast and Break from You, both authors hope to shed awareness on the subjects of bullying and teen dating violence.

My take:
Over the years, bullying has reached epic levels of cruelty and the stories are endless. Taunted by classmates after she accused an older student of rape, fourteen-year old Samantha Kelly committed suicide. Nine teens cyber-bullied fifteen-year-old Phoebe Prince until she hung herself. What about fourteen-year-old James Rodemeyer who was relentlessly teased by kids because he was gay? On September 9, James wrote the following on his Tumblr site: 'I always say how bullied I am, but no one listens. What do I have to do so people will listen to me?'

Well, he killed himself.

On October 10th...Amanda was found dead in her home.

These children are just a few examples of how bullying has gotten way out of control. And teens aren't only being bullied to death; they are also facing another kind of abuse— teen dating violence. Here are some disturbing statistics taken from the Attorney General, via a 2008 study commissioned by Liz Claiborne and loveisrespect.org:


69 percent of all teens who had sex by age 14 said they have gone through one or more types of abuse in a relationship.

40 percent of the youngest tweens, those between the ages of 11 and 12, report that their friends are victims of verbal abuse in relationships, and nearly one-in-ten (9 percent) say their friends have had sex.

More than one-in-three 11-12 year olds (37percent) say they have been in a boyfriend/girlfriend relationship.

One-in-five between the ages of 13 and 14 say their friends are victims of dating violence, such as getting struck, hit or slapped by a boyfriend or girlfriend, and nearly half of all tweens in relationships say they know friends who are verbally abused.

One-in-five 13-14 year olds in relationships (20 percent) say they know friends and peers who've been struck in anger (kicked, hit, slapped, or punched) by a boyfriend or girlfriend.

Only half of all tweens (51 percent) claim to know the warning signs of a bad/hurtful relationship. In addition, significant numbers of teens (15-18) are experiencing emotional and mental abuse as well as violence when dating; it's even more prevalent among teens who've had sex by 14.


To stop bullying and teen dating violence, awareness is paramount. When it comes to abuse, it's important to speak out. I applaud both Susan and Rebecca for doing just so.

Noelle dreams of a different life, one where Trina Brockwell doesn’t exist. Trina has bullied Noelle since junior high. Now she’s tired of it. With the help of her black-sheep aunt and a defiant new classmate, Noelle seeks revenge. But vengeance comes with a price: Noelle risks friendship, her first love, and herself to get back at those who have wronged her.


Break from You by Rebecca Green Gasper 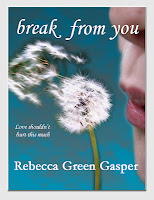 Love shouldn’t hurt this much…Brooke Myers wants to believe she has it all: the perfect guy, the perfect relationship, the perfect life. She wants to believe it so much that she's willing to overlook the fear, the isolation, and the pain her boyfriend has caused her. She knows it isn't right but tells herself that love isn't always easy. However, when a fire destroys the restaurant during homecoming dinner, she forms an instant bond with the boy who saves her, one her boyfriend wouldn’t like. With the pain of a concussion reminding her of how bad things can get, she is forced to re-evaluate the relationship she has with her boyfriend and face the ghosts that haunt her. Brooke once believed love was all it took…but is it enough? Is it truly love when you've lost yourself in it?

Stop by the Moxie Writers blog for a complete list of tour participants. Also, be sure to check out this post where you can win copies of both books!