Melting Pot Monday: My Cat is EVIL or have the lambs stopped screaming? 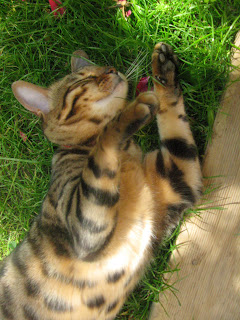 Don't let her sweet face fool you. My cat is Jack the Ripper evil. Just ask one of the 100 or so tail-less lizards running around our neighborhood. In fact, the above picture was taken AFTER I rescued one of her reptilian playthings from certain doom: her jaws. 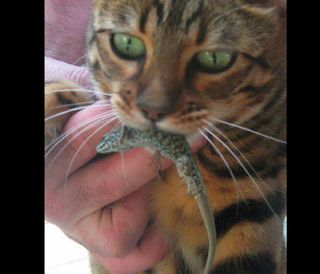 Okay. Before you call PETA, I rescued the lizard right after I snapped the photo. And this little fellow got away, body intact. I swear, I've found at least twenty tails on the kitchen floor. Not a pretty site. No, not at all. Downright scary. Just like Bella...

When Bella hunts, her body goes rigid. But the real warning she's about to attack flashes in her eyes. Her pupils constrict like a drug addicts and then she charges for her fix. No creature is safe. Yesterday, her victim was an unsuspecting bird. Wanting to join in on the fun, her partner in crime, an obese cat by the name of Uranus*, tried to jump the fence, but the twenty-four pound tub-o-lard didn't make it on time...

*(Yes, the cat's name is really Uranus. Yes, I've had many conversations that go like this:

The Frog: Where's Bella?
Me: She's next door playing with Ur-anus. ***breaks out into hysterical laughter***
Yes, I know: extremely mature.)


Toilet humor aside, we were able to save (more or less) our feathered friend.

Not that Bella is a killer. No, she just likes to torture her prey, batting their little bodies around, pretending to let them escape, and then pouncing before they're able to get away.

Thing is, if we don't let her play outside, she goes all American Psycho. On us. 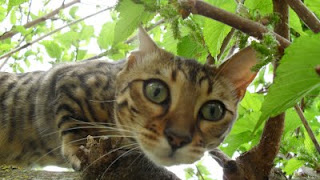 There goes the neighborhood...

What do you mean she looks so sweet???

SOUND-OFF: What do you think of cats?
p.s. Not related to the tiger of the same name, Bella's breed is Bengal – an ancestor of an Asiatic Leopard.