Francophile Friday: Drive, Baby, Drive or getting your driver's license in France 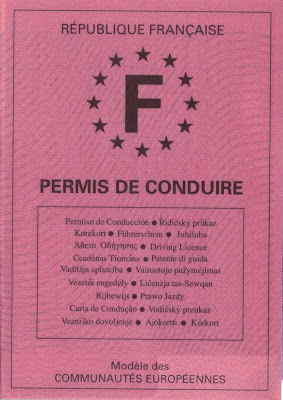 Arkansas, Colorado, Connecticut, Delaware, Florida, Illinois, Kansas, Kentucky, Michigan, New Hampshire, Ohio, Pennsylvania, South Carolina, Texas, and Virginia are the only states with reciprocity with the French government when exchanging your driver's license, which means if you plan on moving to France, and you don't live in one of these states, you better find a relative, a friend, and get 'er done hades or high water...or suffer the consequences: French Driving School.

You have exactly one year from your entry into France to exchange your license.

If you're not able to do the above, and if you want to drive, you'll have to pay upwards of 600 euro to attend a French Driving School. And if your French isn't good enough* to the pass the written exam with all those trick questions and you don't pass, you'll have to pay again. And again. And again. You'll also have to take lessons behind the wheel, which cost 35 euro/per hour (more or less). It's freaking expensive! For those of you in this situation, I'm sorry. I feel for you, I do. And bonne chance!

*It may be possible to hire a translator, which obviously costs more money, and there is such a thing called lost in translation...

You can drive in France with any valid American license as a tourist (might be worth it to get the AAA International Translation of your license before you leave, which is fifteen dollars), but if you are a resident of France, you must get French driver's license before the one year time frame ends or you will be driving illegally. Which also means you won't be insured.

Once you get your French Driver's License it never expires.

Now on to the post: How I got my French Driver's License

When I moved to California I didn't exchange my Illinois license. It wasn't laziness or fear, but pride, considering I was moving back in with the parents. And maybe, just maybe, a small part of me knew I'd eventually be moving to France. Whatever the case, I had a license from one of the states that had reciprocity with the French government.

I moved to France in the beginning of August 2009 and my license expired that October 18th. So I had two months to make the exchange, otherwise I'd be up a very expensive creek without a paddle. We had to move fast. About a week after I arrived, my husband and I went to the prefecture with, what we thought, were the required documents:

a) My long stay visa
b) My passport, which had said visa in it
c) My American License
d) A translation of said license by a certified translatore) Two id photos – it's interdit (prohibited) to smile
f) Proof of address (some bills in my husband's name)
g) An affidavit from my husband stating I live with him


We thought it was in the bag.

After speaking to a somewhat pleasant woman at a plexi-glass counter, we were told to take a seat. A few moments later, another woman – apparently the one in charge – came into the waiting room, called us over, and asked where my carte de sejour was. We explained that we were told that my long stay visa took the place of the carte de sejour for the first year. The woman was quick to correct us. "No, no, no, she said. You don't get a card, but you must get your premier titre de séjour from L'Offi (immigration), which they put in your passport. It may take up to three months to get your appointment there!"

My heart plummeted into my stomach. My bottom lip quivered. Once again I'd found myself stuck in a web of red tape. Getting married in France was hard enough. Now I had to deal with my driver's license (never fun) and becoming an actual immigrant? I quickly explained that I was told I had three months to send in some paperwork to register with L'Offi, but nobody had told me I had to actually go there, nor that I needed this special stamp in my passport.

I was on the verge of tears. I was screwed!

She nodded her head with understanding. "Yes, she said. This has happened before." She paused. "I see your license expires in two months. If you can get a statement from L'Offi that your appointment has been made (the French are big on affidavits, called "faire un mot"), we can start the paperwork and I'll hold your license for you, rendering it when you have your premier titre de séjour."

Somebody in the French government was being nice, helpful, and understanding? After the lady at our local Mairie gave us such a hard time, running us on a never-ending paper trial for our marriage documents, this (although frustrating) was most welcome news. Jean-Luc and I thanked the lady profusely.

The moment we got home, I had Jean-Luc call L'Offi. He was able to get somebody in charge on the phone and he explained my situation. Although the first appointment wasn't until November, after my license had expired, he'd agreed to send the letter to us via email.

It arrived in Jean-Luc's inbox within ten minutes.

And whoa! The French government actually worked quickly? Not to put the American system down, but things, well, they move a tad bit slower. Or, maybe I was just having one of those rare lucky days.

About two hours later, Philipe from L'Offi emailed my husband again, saying an appointment had opened up in early October. Would I like it? And hell to the yeah, yeah, yeahs! He also explained, that after I paid the taxes (around 300 euro), passed my medical exam (which was given at L'Offi), spoke with an official so they could assess my French and employment skills, and sat through a two hour lecture on France, I would receive my premiere titre de séjour that day. (All of this is definitely another blog post).

Long story short, I was able to get everything done before my license expired.

But my story doesn't end here.

I went back to the prefecture, all required documents in hand, including the premiere titre de séjour in my passport, ready to get my Permis de Conduire.

The lady at the window had another agenda: torturing me.

LADY (in French): When did you get your American driver's license?

ME (agh. I'm horrible with years): Mille Neuf Cent...Can I write it down?

LADY : This license was issued three years ago, not 1986. You have to get me a copy of your original license.

Me (voice is shaky): But we renew our licenses in the US! And it's impossible to get a copy of my old license, especially one from so long ago. And it wouldn't be valid. Plus, I live here now.

LADY: I'm sorry, but there's nothing I can do. We have rules.

Me (getting mad): I'd like to speak with the woman in charge, the one in the back, please. She assured me the last time I was here I had everything I needed.

LADY (eyes me up and down, then rolls her eyes): One moment. Please have a seat.

I step away from the counter and sit in the waiting room. The woman leaves her desk and reappears five or ten minutes later. It feels like hours. She shuffles some papers and calls me over.

LADY: Okay, I spoke with my superior and we can give you your Permis, but it will have to say you've only been driving for three years, from the date stated on your current American license.

(thinking, just get it done before you give me a nervous breakdown! I don't care if it says I've been driving for a day. JUST. GIVE. IT. TO. ME. NOW.)

LADY (pushes a receipt through the slot): It takes about three weeks. You're able to drive with this for now, and we will contact you when it's ready to be picked up. Good day.

ME: Thank you. (blows out sigh of relief)

I didn't question why it took so long to prepare a piece of pink paper with my picture glued into it. I just left, happy to have survived the process.

Three weeks later I got a post card in the mail stating my Permis de Conduire was ready. I went back to the prefecture where, after waiting a few moments, the helpful and understanding woman I'd met the first time came out from the back office...smiling.

And that's how I got my French driver's license.

SOUND OFF: Don't you LOVE red tape? And getting stuck in it? Have any experiences you'd like to share?